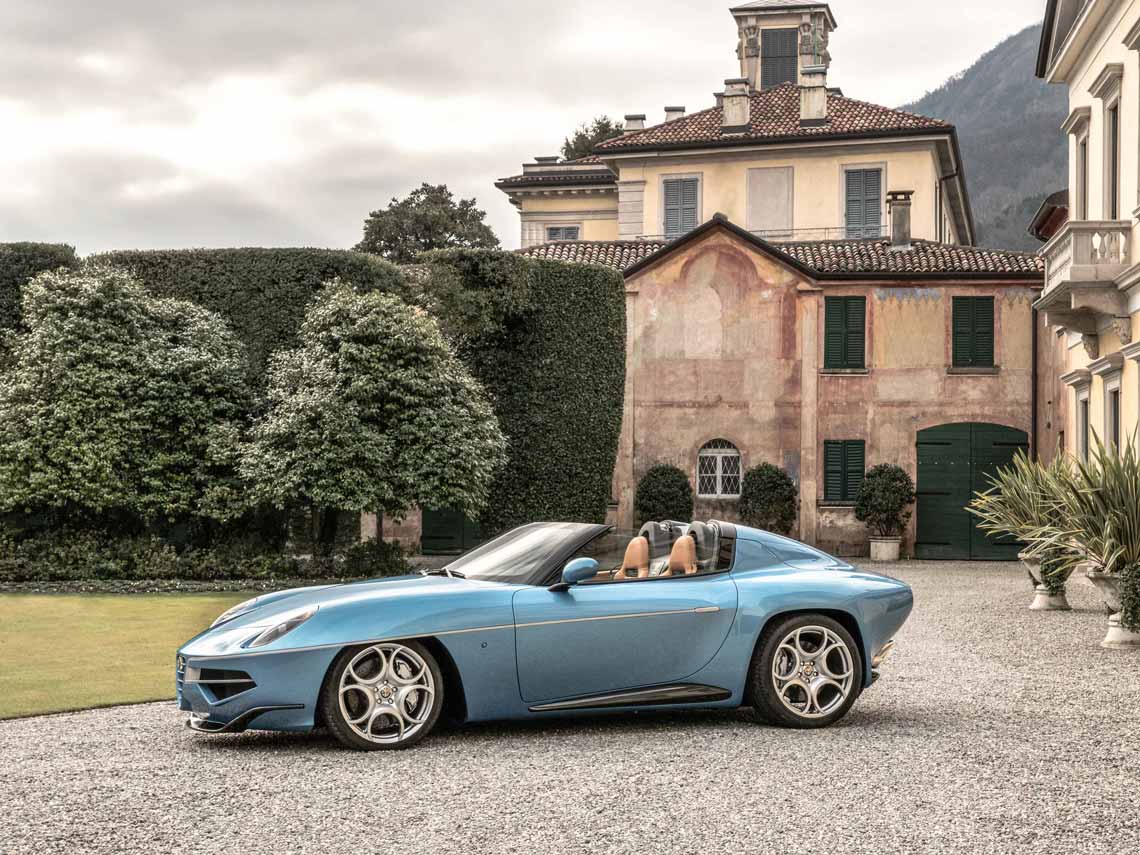 Touring turns ninety and celebrates this important anniversary at the Geneva Motor Show 2016 with a brand new car. A bold interpretation of the open top car, fully devoted to the pleasure of riding with wind tousling one’s hair.

The Alfa Romeo Disco Volante Spyder is a two-seater open top car, based on the Alfa Romeo 8C Competizione Spider. It is built for discerning customers in just seven examples, more than half of which have been sold already. The model being showcased at Geneva is the first of the series. This is the first open top production car in Touring’s recent history. As such it had to be a bold design statement which starts to outline Touring’s future design language. The 1952 car was revolutionary. The Disco Volante Spyder is as astonishing and exciting as a coach built car should be. “We did not want to compromise the pleasure of driving open top. This car is designed as if there was no roof at all” says Louis de Fabribeckers, Head of Design.

For this car Opac designed and created the hard-top roof, made entirely of carbon fiber. "In spite of our thirty-year experience in the field of hard and soft-top for the automotive and marine sectors, each new project is always a new challenge - explained Luca Sacco, CEO of the company -. Each car has special characteristics, technical and aesthetic, which should be considered in the construction of a roof. For the Disco Volante we tried to cleverly combine tradition with technology”.

Innovative twin carbon fibre roof converts the Disco Volante Spyder into a comfortable fixed head coupe allowing daily usage with outstanding comfort. Louis de Fabribeckers: “Personally I would have a very hard time choosing the configuration I enjoy most between open top or carbon roof. Both have their own essence without compromising on style”. With each roof weighing a bare 3.5 Kg, it is designed to be comfortably stored in the boot, whilst still leaving room for a real luggage set. Substantial weight is removed from the upper part of the vehicle, conceding great advantages both to handling and performance.

The Disco Volante Spyder is inspired by the 1952 Alfa Romeo C52 also present on the Touring stand courtesy of Museo Nazionale dell’Automobile “Giovanni Agnelli” of Turin.

For Piero Mancardi, CEO of Touring, “The Disco Volante Spyder is the perfect example of the haute couture philosophy that made Touring a respected player in the luxury car scene in recent years".

Bringing together under one roof a talented design team and skilled craftsmen who preserve and maintain the art of the panel beating whilst integrating the most advanced engineering tools. This is the formula that allows Touring to fulfil the rising demand for truly exclusive coach built cars. “We are immensely grateful to Alfa Romeo for having supported this project. Customers and manufacturers give us their trust and we see a bright future ahead of us” Piero Mancardi.